in honor of the premiere of season 2 of downton abbey dad whipped up a pompous worthy roasted chicken. 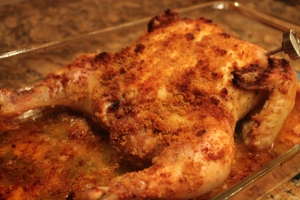 while the rest of the meal was being made (which included mashed potatoes, peas, cole slaw, and some left over eggplant parmesan) dad and i speculated what was going to happen on this WWI epic.  definitly mathew at some point will become wounded and missing making mary realize that she does love him.  i saw he’s going to wind up with a bum leg dad says temporarily blind.  we all hope the youngest cybil ends up with the political rebel chauffeur and the family concluded whatever maggie smith does is perfect because well she is maggie smith.

dad cooking and coming up with plots

we all huddled around the table and waited to see what would happen.  i advocated that for the rest of the season we create british themed meals to go with our british miniseries, mom however declares there is no good british food, the debate continues.

ready to dig in