The best meal if the year (so far) took place on Wednesday, April 11th at 8:30 PM in Chicago Illinois at a restaurant we’ve walked by tons of times going to our favorite Chicago Italian restaurant, Volarie. On this particular night Volarie chose to close early and fate dropped us off at Coco Pazzo Cafe’s doorstep. Thank you fate. 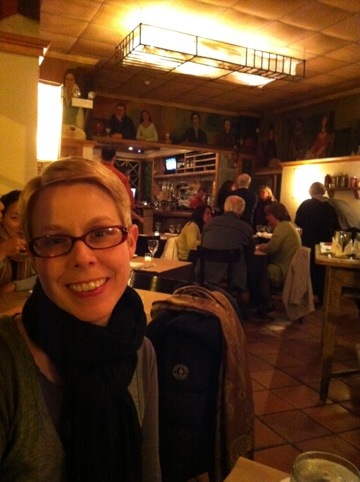 We started with a chopped seven vegetable salad topped with a thin slice of Parmesan. Amazing! Hardly any greens, but plenty of tasty veg. There was so much flavor and so little dressing of any kind.

John had a spicy spaghetti. We didn’t know the dish was spicy until they sat it in front of John with a chili pepper in the center. It had heat, but wasn’t over the top spicy, which was good for me since I don’t like spicy and I kept eating it off his plate!

I had this incredible butternut squash stuffed pasta in a rosemary, sage, butter, amaretto sauce. The best thing about this dish was the crispy bread crumbs sprinkled on top of the pasta. They soaked up the sauce and added another level of flavor to the meal. I wanted to coat myself in bread crumbs and roll around in the sauce. 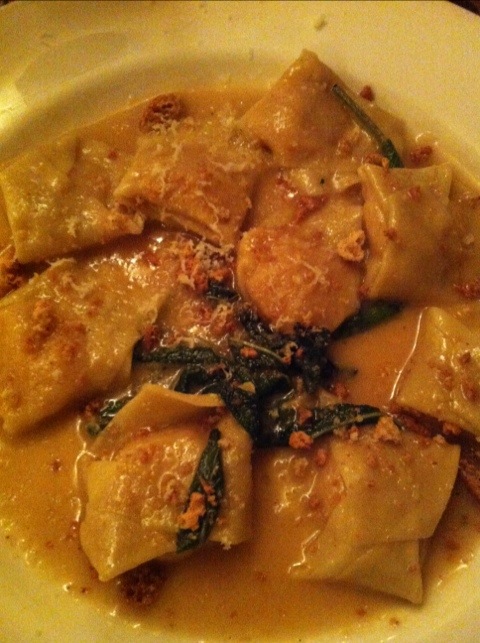 For dessert we ordered gelato and spumoni. John had lemon while I had two kinds of gelato, chocolate and cinnamon.

And yes, we did close the restaurant (a first for us), but we left a big tip! Thank you Coco!