so the past couple of sunday night dinners that dad has created have been down the lines of something like this…………………. 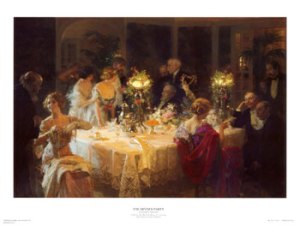 well actually no, not so much like that, but we have been seriously distracted by the soap opera of downton abbey coming to an end.  last week we even had an in-depth conversation of what would be a good downton abbey themed cocktail, mom yes my mother, even got out bartending books to look up drinks.

steph and i currently have a frozen custard bet going on about whether or not mr. bates really killed his wife, i say no she says yes, alas we won’t know till next season!!!!!!

with the season finale last night i suggested, to kick off the third season, we should start a pool for plot developments, think like a super bowl pool except for a pbs 20th century historical masterpiece theater, i think someone could win some serious money $$$$

now that we won’t have in-depth plot discussions, or contemplating a downton abbey worthy meal, i will perhaps start remembering to take pictures of the wonderful food dad makes on sunday nights.