i was looking for happiness in a bowl and the last time i experienced that was eating shrimp and grits, so i decided that was what i was going to make for my sunday night dinner. little did i know i was about to embark on a cultural experience.  first came the purchasing of the shrimp.  i headed to the shrimp dock, a local fishery and seafood shop.  when i declared i needed a pound of shrimp i was asked, kind, size, etc. my blank stare and my thoughts of “there is more than just cocktail shrimp?” was quickly followed by “whatca makin?”  when i said shrimp and grits they automatically pulled my shrimp that range in the 14-15 size.  alas they were not peeled and deveined!!  i’ve never peeled and deveined shrimp before.  peeling not so bad, deveining was like pulling out thread. i’m sure i totally butchered them but i felt i did well.  then i discovered a whole world of grits.  i’m used to the midwest grocery store they have 5 minute grits and slow cooking grits.  in the south the grits section is larger than the oatmeal section.  did you know that you can buy little individual packets of quick grits, like instant oatmeal?  and they come in flavors, including ham and cheese, brown sugar and sausage gravy!  after all these new experiences the end result was contentment in a bowl. 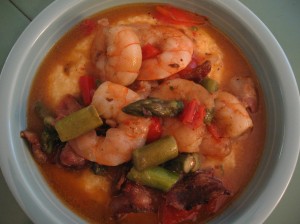 best part about having cornbread with a meal is getting

to eat the leftovers for breakfast, corn bread milk and honey, nom. 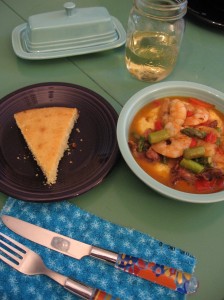